It's the future. You are a computer professional. You decide to customise and buy a childlike sentient android. Five years of service are included. After that, the android will be free to stay with you or move on. How you treat them will determine whether they stay and what sort of relationship may develop.

They can be your servant. Your friend. Your ward. You choose.

The player character and the android each have a choice of nonbinary, female, or male.

This took me about a year to make.  I've played it hundreds of times if not thousands, and I had several beta testers (thank you!). I will probably release a few updates if problems are found, but I don't plan to make any major changes to the interface or story. Please let me know if you find bugs or any language errors! Note that spellings are in Canadian English.

Thanks for playing, human!

Linux: Extract it. Run cuterobot.sh. You might have to start it from a terminal window.

Mac: Extract it and move the cuterobot file to your /Applications folder. Then run it from there.

Windows: Extract it and run cuterobot.exe.

Android: Download directly or copy it over USB. If you download it with the Chrome browser, you should be able to open it directly from there after giving it permission then and there. Or use a file manager to install it and get past the "unknown developer" warnings. Note that there are two Android versions. The "armabi" version is for phones. The "x86_64" version is for tablets and emulators.

Web: Download the web version and open in a browser to play offline. Or play it directly in the window above where it says "Run game"!

Hi!! Your game is beautiful and I loved it! If you ever want to translate it to Spanish let me know. I can do it for free, Spanish is my native language. It really would be nice more people could play this awesome work.

Thanks, glad you loved it! I would love a Spanish translation! I did some coding with the writing so that it works for female, nonbinary, and male characters. If you could provide female and male translations, I think I could figure the rest out. You can DM me on Twitter, or I can provide my email address if that works better. Gracias!

Such a cute game, but now it's unable to be played on the site?? Makes me really sad, I LOVED playing it after school on my chromebook!

Oh no! Let me see what went wrong.

I recently made a small change from Opera and saved the project, and it looks like the setting for "playable in browser" doesn't show up in Opera.

Long story short, it's fixed now. Thanks for pointing that out!

Thanks so much for the quick response and for fixing it! This is my absolute favorite visual novel on itch!

What version of opera was this? I just tested opera and didn’t have any issues editing a project page

63.0.3368.35. But! I think I ticked the wrong box somewhere when I was uploading something. I don't think it was an Opera issue after all.

Very great and a cute game, i love how visual novels get more creative with time. Like how the locations are made out of paper, nice!

Oh, the name of the game is really funny for some reason.

Yay! I was going for cute.

This is adorable! I love it! I've only just finished a route but I had to say something! As aforementioned this is so cute! Also I got too excited when it was established we were in Canada. Overall I thought it was great! :) <3

Thank you! I'm glad you like it. You're the first to mention anything about it taking place in Canada!

I'm from Canada so whenever I see it in games and stuff I get unreasonably giddy.  (^_^')

i tried to do all the routes but after 4 or 5 play throughs i still could not do the romance route options it just made me feel off every time i hovered over the option.  i enjoyed the parent option and the existential ideas it gave about us and the loose comparison to modern predjudace. the friend route was comfortable and i felt like maybe i was a roomate with a child genius or maybe a second cousin that i felt responsible for.

that being said even though it was just a game and the character was a android some part of me still couldnt connect it as not human not a child the design of the androids were to blend in seamlessly with humans as to not tell the diffrence and becuase of that they instill a mental moral siren in my head.

i will say you made the game with artistry that followed a stable continuity and characters that didnt break their characters. I felt in the role of the Mc the entire time without immersion breaking on the routes. except the one i failed to do. who know maybe ill one day do the last route just to solve that completionist itch.

Thanks for your review. I'm glad you enjoyed it, and I like your honest description of your reaction.

I have playtested hundreds of times, and for me, the android seems the most non-human in the romantic route, if that helps.

A wonderful game! I've only played the Mom route so far but its so sweet! The customization is a really nice touch~

I can not put into words how much I love this game. It is an artful masterpiece with beautiful artwork, amazing songs, and the cherry on top - the skilled writing that was riveting, and enthralling. I was completely engrossed in the game until the end. Thank you so much for putting it on the phone, because I don't have a windows device, so I couldn't have played it otherwise. Thank you so much for making this game!

Thank you for your detailed comment! I'm glad you enjoyed it.

Thank you! I'm glad you enjoyed it!

I found this game very interesting and enjoyable. However, it almost felt, wrong playing it. After playing a few times, I decided to go the romantic route, not because I'm romantically interested in children, but because I wanted to find as many routes as possible. When I finished and the message about the website to visit if you're attracted to children came up, I felt almost dirty. I figured, whatever, I'm enjoying the game, I'm sure that's just for the people who are using the game for,,, different reasons. Then i played again, and the passphrase "I am virtuous" was used, and it connected, virtuous pedophiles, I am virtuous.

I dunno, you're very talented and have made a great, enjoyable game, but some of the options rubbed me the wrong way.

Ideally, there would be the same options, but with more education on what is and isn't okay. For example, the romantic route, instead of having the positive romantic ending, only the choice of a negative ending, where the android, having lots of knowledge on csa and pedophilia, decides to end the arrangement as soon as feelings are admitted. Or even a positive "romantic" ending where when feelings are admitted, the android uses their knowledge to explain that the arrangement will no longer work, and recommend therapists or websites to seek support (this is where you could put the website that is at the end of the current positive ending).

I dunno, i really enjoyed the game, but I think normalizing attraction to children and being in a relationship with children is not okay, even if they are just androids, well, this type of thing could attract a certain crowd, especially with the romantic endings.

Thank you for this game, I hope you make others in the future, just hopefully without the problematic options ;P

Oh and I forgot to mention how much I love the art in this, the idea of using craft materials to make it like a collage/school project looking thing is something very unique and cool that I have never seen before.

Thanks! It's something I came up with when figure out how to do more on my own, not being much of an artist.

Thank you for your thoughtful reply. This is probably the only game I'll make that is anything like this. It seems to me that everything that you think would be problematic would be okay if the character is not an actual child and does not think like a child.

Seriously? "You decide to customise and buy a childlike sentient android" "Some routes contain romantic content." This is disgusting.

Currently halfway through my third time playing it, I want to see how many different endings I can get. I have to say, as someone who's not used to videogames, this was really fun. The story is fun and endearing, the art is unique without compromising plot or playability and you can aim towards an ending without it feeling like a straight line.

Thank you! I'm glad you're enjoying it!

Such a wonderful game! I really enjoyed the art style of it, did you make everything yourself? :o

The music and atmosphere in the game was very nice and I can't wait to finish the game :D

I don't know if you've heard of Game Development World Championship before (gdwc2019) but it's a competition for indie game developers where they can submit their games and it's free! It's great if you want some more visibility for the game and it only takes a couple of minutes to join :)

Thank you! I commissioned the character art and found public domain music and sound effects.

I will look into the Game Development World Championship.

Reply
The GDWC2 years ago

I haven't done a video capture of the game, but I'm sure I can figure that out. That's the only part I'm missing.

Reply
The GDWC2 years ago

Oh, nice! :) One option is to just screen record when you play the game :D 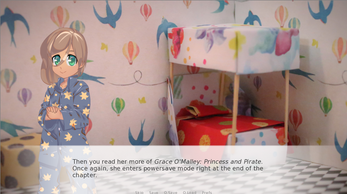 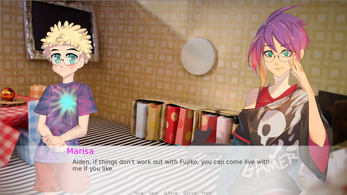 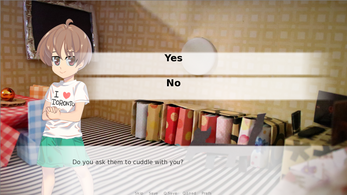 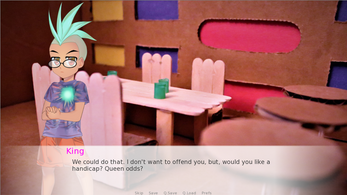